The 4th contradiction listed on the BibViz website is: “Abiathar’s Father”

The alleged contradiction is as follows:


Abiathar was the son of Ahimelech

Abiathar was the father of Ahimelech

Argument
It is claimed that Abiathar cannot be both the father and the son of Ahimelech.
Reflection
There are many possible solutions to this alleged contradiction.

Two Ahimelechs
It is possible that (as per the below family tree image), there were two Abiathars, a grandfather and Grandson with the same name.  This is a highly plausible option if we consider family naming conventions still in use today, where children / grandchildren are named after their parents / grandparents, or even have a first second name (i.e. Abiathar Joshua or Joshua Abiathar) that is the name of a parent / grandparent. 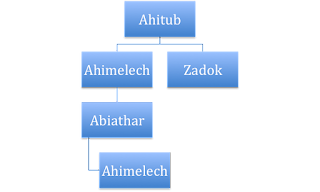 Two Abiathars and Ahimelechs
An alternative in a similar manner is that there could be two Ahimelechs as well as two Abiathars which would look like this: Same Name
A third option is that both have the same name – Ahimelech Abiathar (or Abiathar Ahimelech).  It could be that the Chronicler and the author of Samuel approached the names for each of these differently.

A co-reign / succession
Two people could have co-reigned together with Zadok, or one could have succeeded another and taken his name (kind of like a confirmation saint’s name is used as a reference name for people within some churches).

One in Spirit and Power of the Other
One person could have been nicknamed after another, kind of like when John the Baptist is said to have come in the Spirit and Power of Elijah, or that Elijah has come (cf. Matthew 17:12-13, Mark 9:11-13, Luke 1:17).

Abiathar recognised as the greater
One referred to as the other, because of the pre-eminence of the other during this time.

Conclusion
I think one of the first two of these is the strongest of the options, but the plausibility of any of these demonstrate a no real contradiction exists.</span